The project has now reached Phase 2b in which you can help to co-produce the advance statement resource to help those that will use advance statements in the future have an easier process of creating an advance document. 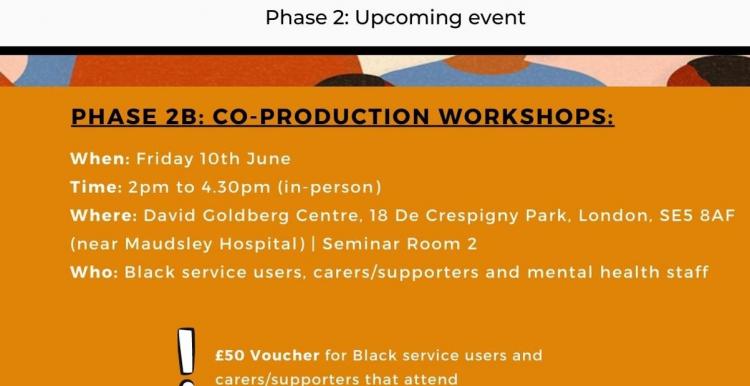 Invitation & Summary – What is the purpose of this project?

You are invited to take part in this project about Advance Statements for Black African and Caribbean people.

An Advance Statement is a document that allows a service user to have a say in how they wish to be treated in the future if they become mentally unwell and are detained under the Mental Health Act. Advance Statements are normally made when a person is feeling mentally well and living in the community. Advance Statements can be made with the help of others such as, family/friends, mental health professionals such as their doctor or care coordinator, and people independent of their care such as an advocate.

The Advance Statements Project is a research project aimed at ensuring Advance Statements will work for Black African and Caribbean service users who have previously been detained under the Mental Health Act, carers/supporters and mental health staff. The aim is to work directly with people from these groups to develop:

Who can take part?

This phase of the project aims to use recommendations from Phase 1 and 2a to co-produce the new advance statement resource. You can take part if you are over 16 years old, can speak English sufficiently, and:

A £50 voucher will be provided to Black service users and carers/ supports who attend.

To join, please email the research team at: abigail.babatunde@kcl.ac.uk

More details can be found in the Participant Information Sheet below.

Do health and social care services know what you really think?

Share your ideas and experiences and help services hear what works, what doesn’t, and what you want from care in the future.

Do you have lived experience of MSK conditions? Be part of the decision-making boards and help improve the patient journey for people with musculoskeletal conditions (MSK)
The South East London Integrated Care System is working together to improve the patient journey for people with MSK conditions and have formed the south east London MSK Programme.
28 June 2022
News
Help shape the new Integrated Care System!
Join an ICS strategy development webinar for local people and people working in the voluntary, community and social enterprise sector!
28 June 2022
News
Join a Focus Group for the Black Space Wellbeing Group
This will kick start Southwark Wellbeing Hub's engagement project supporting mental wellbeing in Black African and Caribbean communities in Southwark.
28 June 2022
News